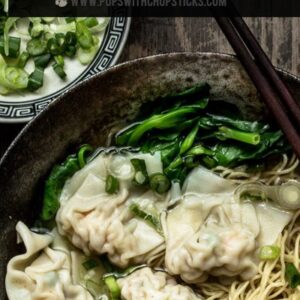 A recipe for an easy Chinese wonton soup with wonton dumplings filled with shrimp and ground pork and served in a simple to make seafood-based broth. Includes a step-by-step guide on how to fold wonton dumplings. 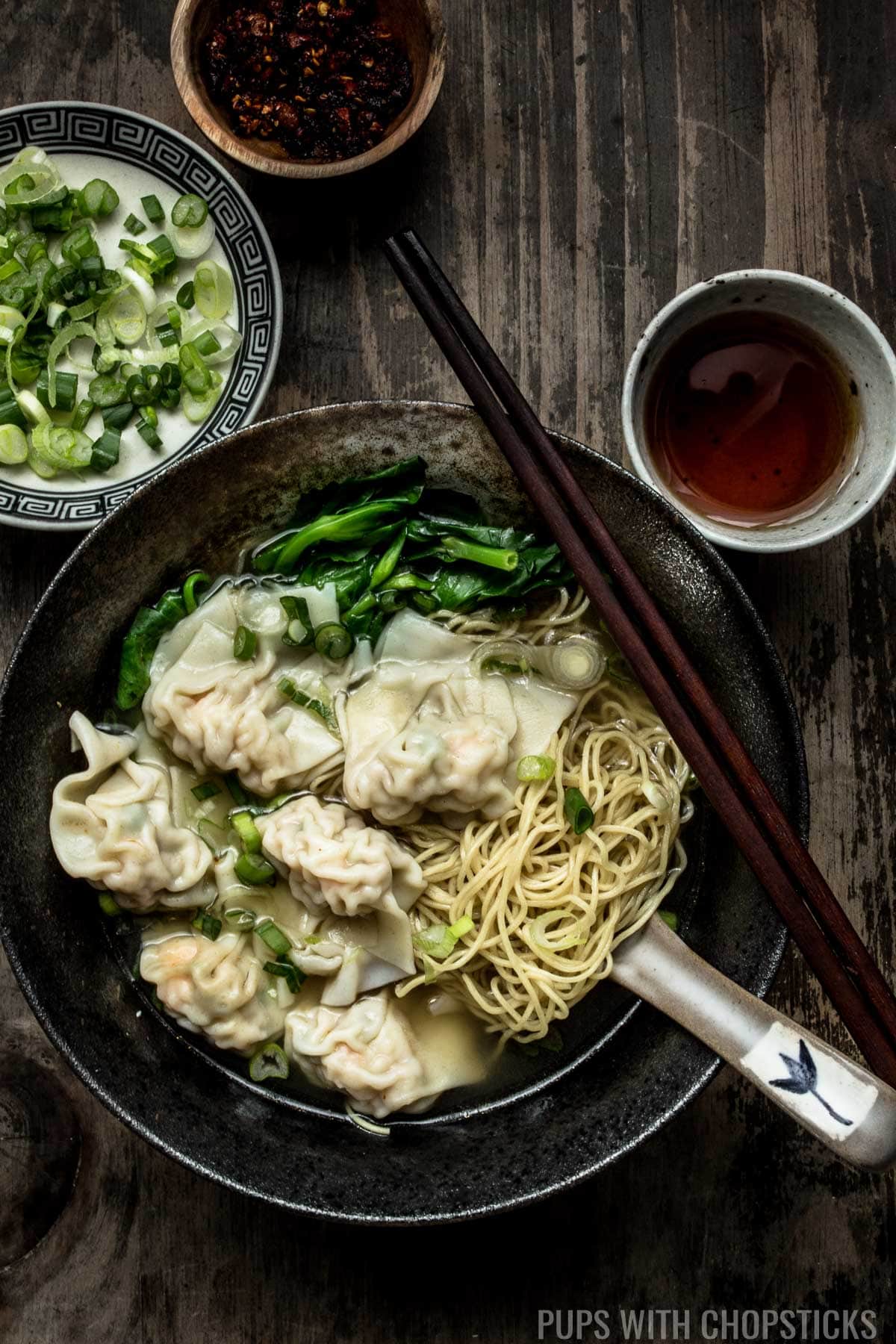 If you're looking for a comforting Cantonese wonton soup with wonton dumplings, then you have come to the right place!

When it comes to cozy noodle soups, there is no shortage of those recipes here. I love being cozy and what better way to do it than to slurp down some Spicy Bun Bo Hue (Vietnamese Beef Noodle Soup), a creamy and easy Khao Soi (Thai Coconut Curry Noodle Soup), or maybe a simple Turkey Udon Noodle Soup!

That being said, wonton noodle soup is a simpler and more clean broth-type soup. It's a lighter broth, with a lot of seafood flavors in it and it's very easy to make. The brunt of the work is actually making the wonton dumplings but don't let that scare you away and stop you from making this though, the dumplings itself is also easy to make, it is just time-consuming but the good thing about it is, you can make a huge batch and freeze it and use it anytime for a quick 15-minute wonton noodle soup meal!

How to Make Wonton Soup

When it comes to wonton noodle soup, the real authentic stuff is definitely a labor of love.

This is something I like to put together quickly and easily using ingredients I usually have at home or can easily buy at my local grocery stores. To make that seafood flavored soup base, I take a shortcut and use shrimp shells from the shrimp you use for the wonton filling.

What Type of Noodles to Use for Wonton Noodle Soup 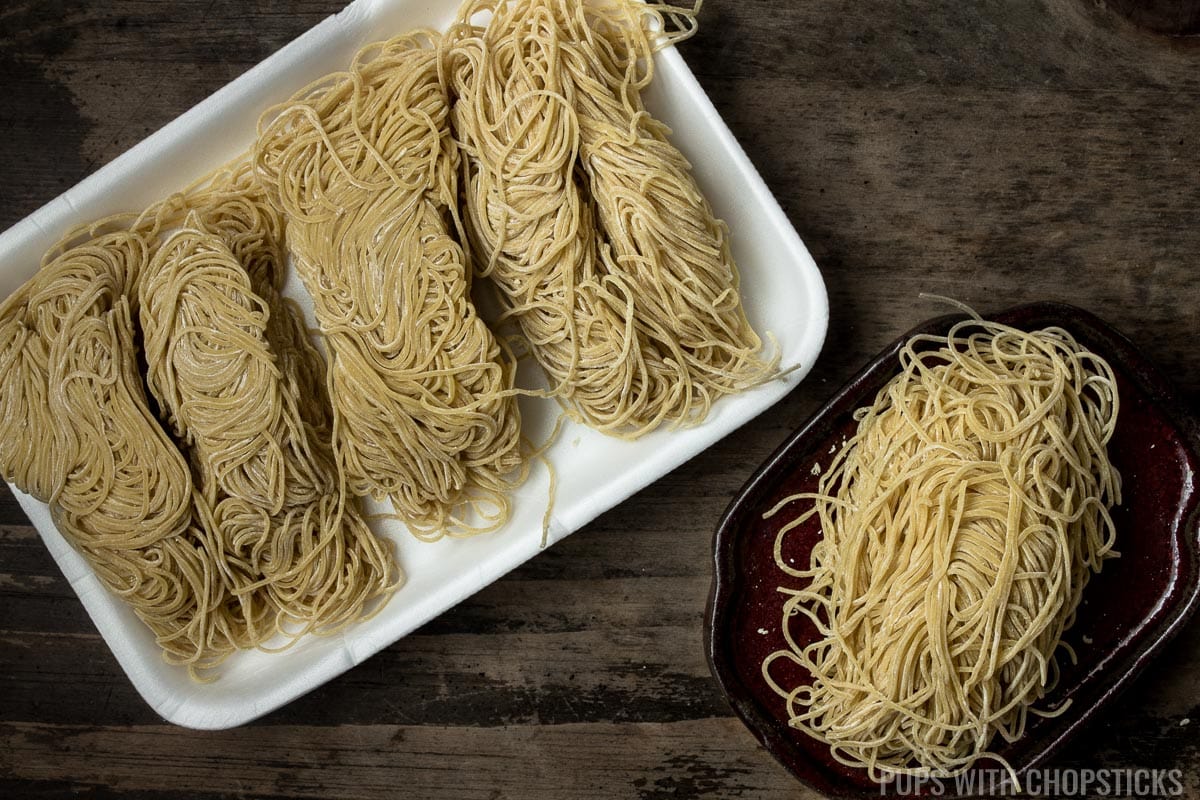 The best type of noodles to use for wonton noodle soup is wonton noodles. You can find them in your local Asian grocery store in the refrigerated section where the rest of the fresh noodles are. They usually come packaged on a styrofoam tray in bundles of 4 or 5 and wrapped with plastic wrap. The noodles are thin, light brown in color, and look dry to the touch (not greasy).

How to Make Wonton Filling

Depending on how you like your wonton dumplings. You can choose to roughly chop the shrimp and keep them in large chunks for a bit more texture and crunch or you can finely chop them for a smoother filling. I personally love the larger chunks of shrimp in my wontons because it gives a bit more shrimp flavor per bite, and it has an overall springier texture. 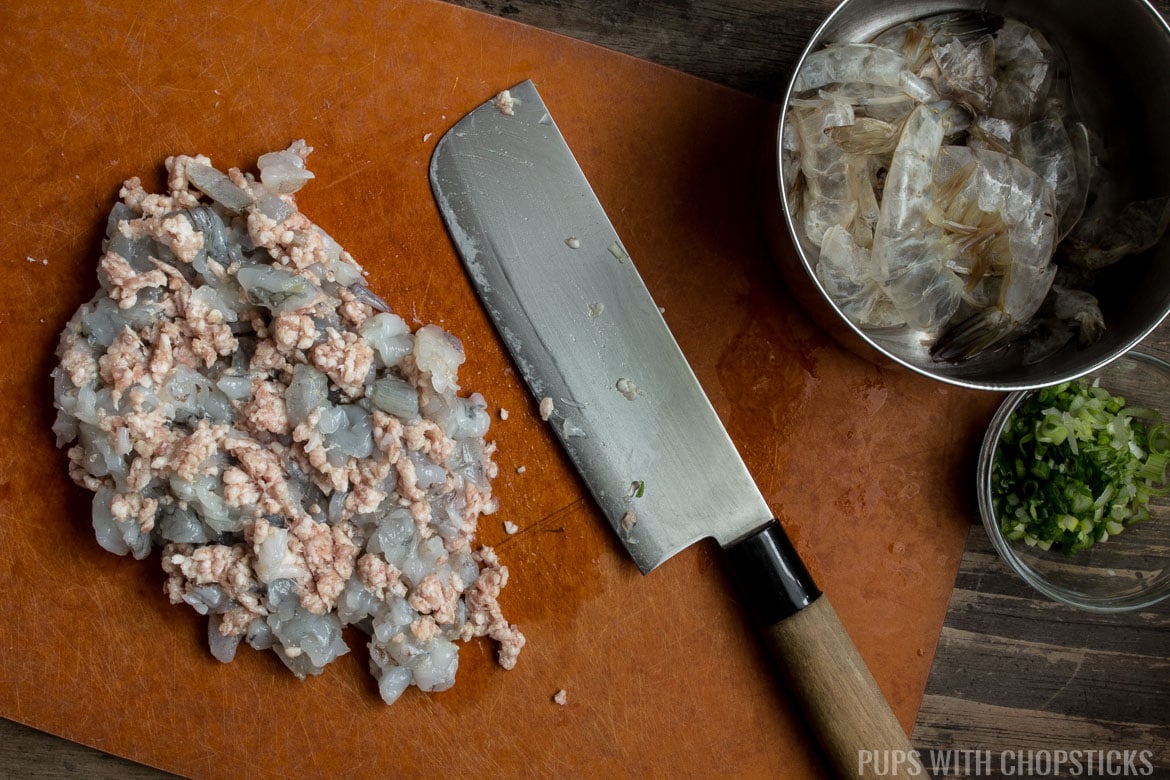 Once you have finished chopping the shrimp, I like to mix the pork in with the shrimp on the cutting board and give it a few more chops to incorporate them together. Then I add it all back into a mixing bowl, add the green onions and seasoning, and start mixing. It's important to mix everything in one direction for no less than 5 minutes. It's easier to do using a mixer but it's definitely doable by hand with a bit of elbow grease. You want the pork to be gluey-looking. Doing this gives the wontons a nice springy texture. 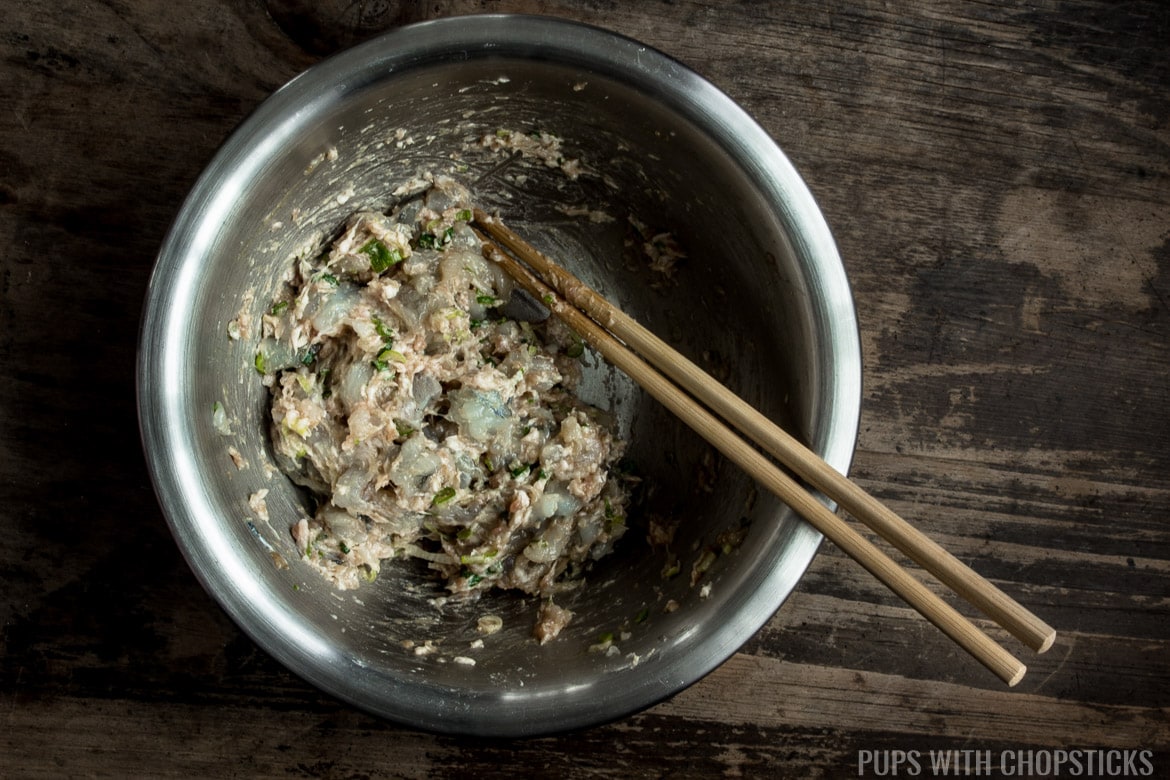 How to Fold a Wonton Dumpling

Let's go through this together step by step! Folding wontons is a lot easier than you think, mostly because there is actually no right or wrong way to do it. As long as you have a bit of filling in the wrapper and use a bit of water on the edges of the wrapper as a sealant then you can actually just smush the corners of the wrapper together to close the dumpling and they should stick together into a bundle! Follow along with me below to see how I like to make the dumplings.

How to Freeze Wontons 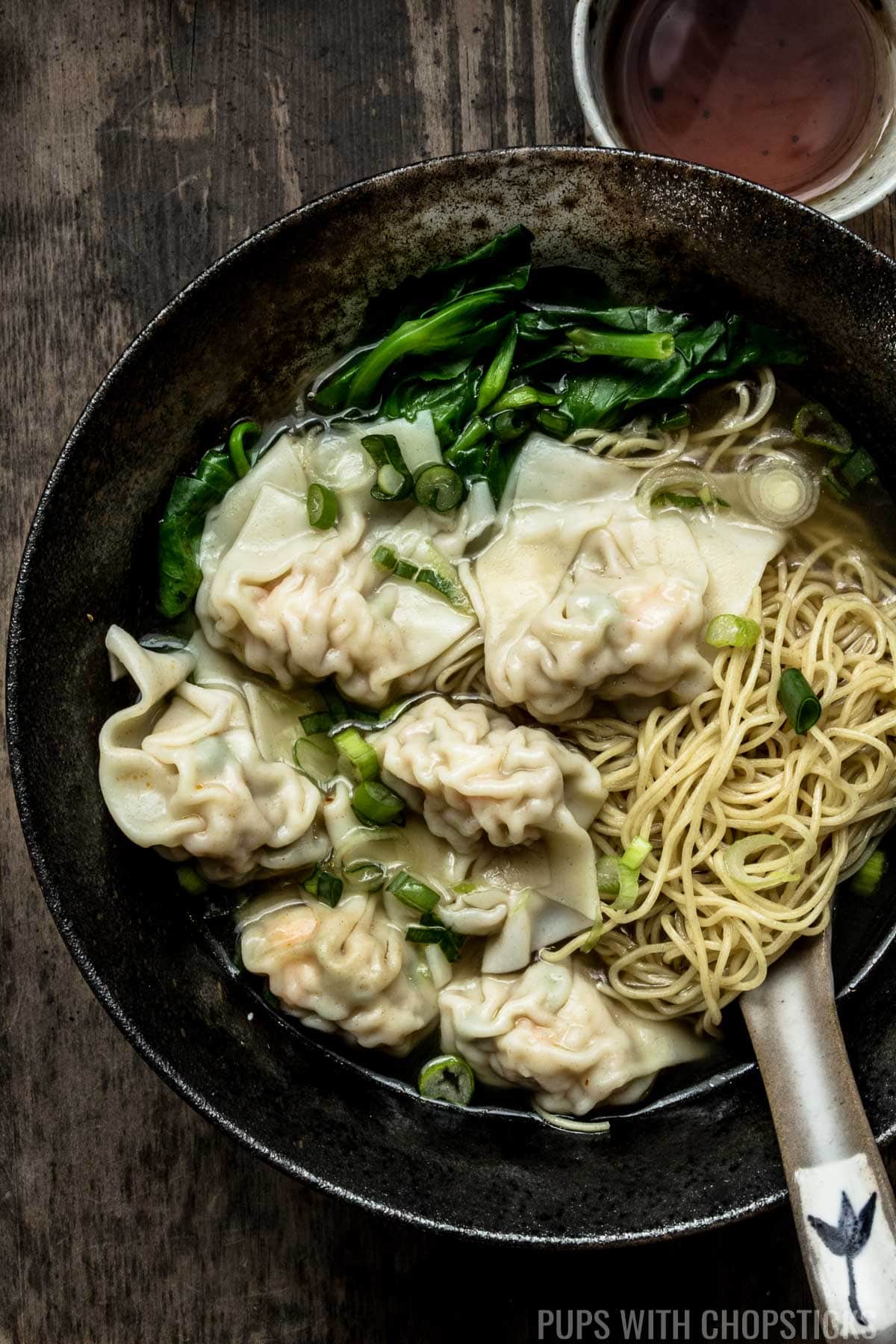 If you have extra wonton dumplings, you can easily freeze them so you can use them on another day. Place the dumplings in a single layer on a metal cookie sheet that has been lined with parchment paper so they don't freeze onto the cookie sheet. Make sure the dumplings are not touching each other, so they don't stick together while it is freezing. Place the cookie sheet with the wonton dumplings in the freezer for 45 minutes to pre-freeze them. After 45 minutes, remove them from the freezer and store them all in a freezer bag together, the dumplings should be firm enough that they won't stick together.

Can you freeze store-bought wonton wrappers?

Yup! Put them in a Ziploc bag and squeeze out all the air and then keep them in the freezer for up to 6 months.

How do you cook frozen wontons?

You can boil them in the water straight from the freezer to cook them. Make sure you don't cook them directly in the broth, because it will make the broth cloudy and thick.

How do you freeze wontons without them sticking?

Use a cookie tray and line it with parchment paper. Once you have folded the wontons, place them on the tray but make sure they aren't touching. Put the tray in the freezer for 30-45 minutes and once the dumplings are frozen or firm you can combine them all into one large Ziploc bag.

How do you use frozen wonton wrappers?

Take them out of the freezer the night before and put them in the fridge to thaw them. Once they are pliable, they are good to use.

Did You Make This Wonton Recipe? 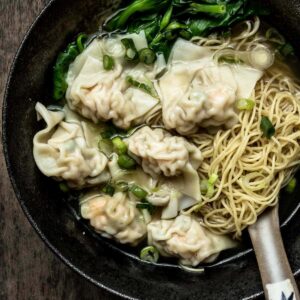 Did you try this recipe?I'd love to hear from you! Let me know how it was and consider giving it a rating! Tag me on Instagram with @pupswithchopsticks to show me!
Made with ♡ by Joyce Lee

Disclaimer: We are a participant in the Amazon Services LLC Associates Program, an affiliate advertising program designed to provide a means for us to earn fees by linking to Amazon.com and affiliated sites. While I appreciate the support – please try to buy your items locally if possible to support your local shops (chances are they are cheaper locally as well!)