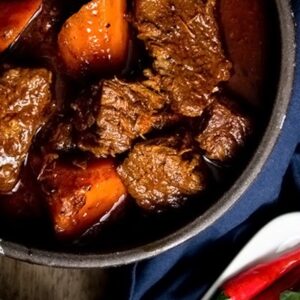 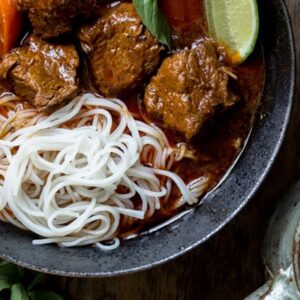 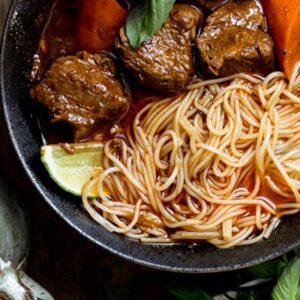 A Vietnamese beef stew has all the flavors of a traditional beef stew with additional aromatics from lemongrass and star anise to give it another dimension of flavor. It can be eaten as beef noodle soup with rice noodles or dipped in a french baguette! If you love beef stew, you definitely need to check out this Bo Kho recipe. 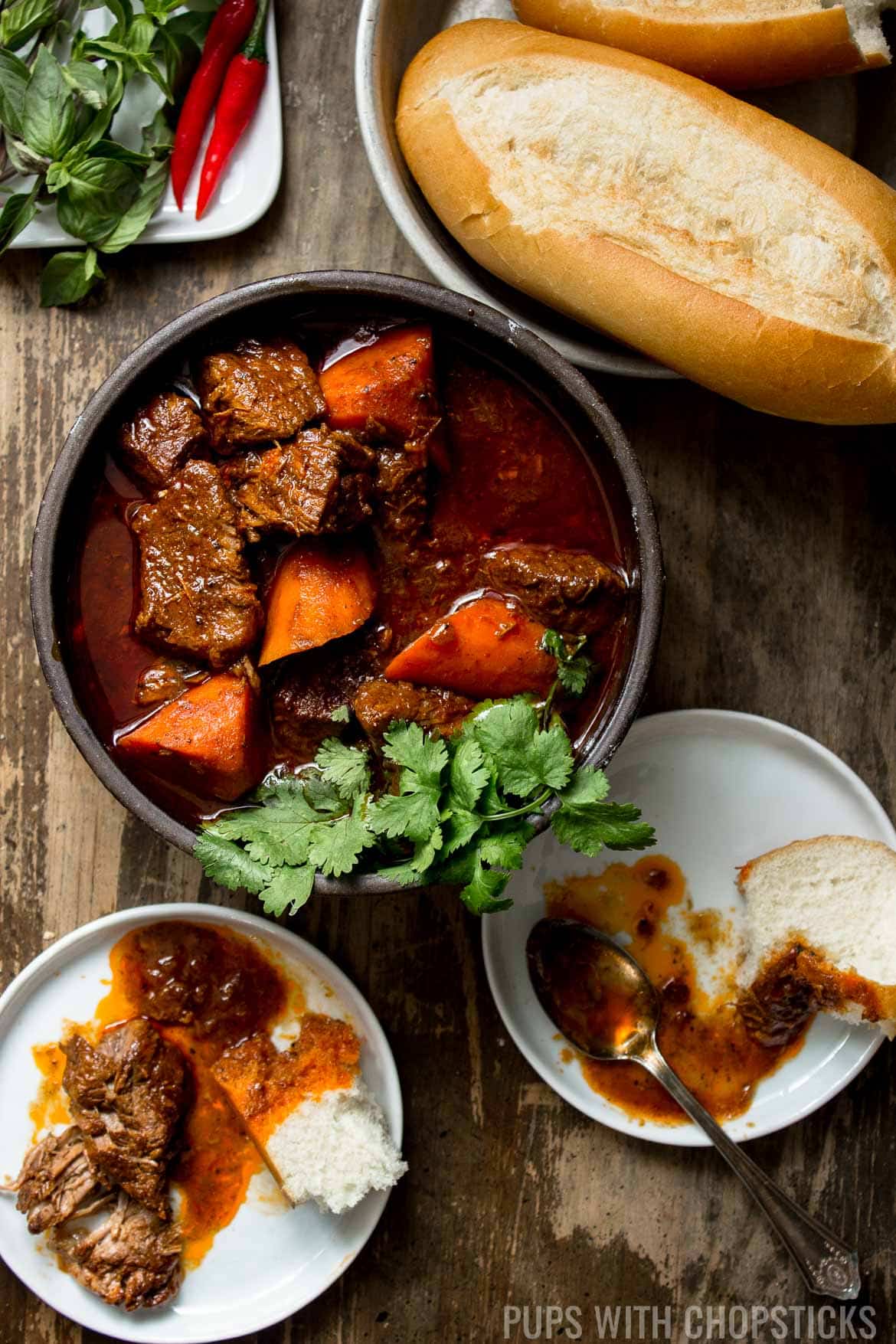 WHAT IS BO KHO?

Bo kho is a Vietnamese flavorful beef stew spiced with aromatics such as lemongrass, star anise, and cinnamon.

One of the biggest reasons why I love Bo Kho is because it is such a versatile dish. It can start out as a stew and be eaten with a baguette or some rice, and if you're feeling bored of the stew it can be easily transformed into a beef noodle soup bowl, simply by adding some beef broth and a few additional splashes of fish sauce and then garnished with basil and lime. To be honest, this dish is actually not very different than your traditional beef stew. The main difference is aromatics. Instead of using traditional herbs like herb de Provence, thyme or rosemary - Bo Kho uses star anise, lemongrass, and cinnamon. So if you have never tried this, and love beef stew, I would highly suggest you try this!

INGREDIENTS AND SUBSTITUIONS FOR BO KHO 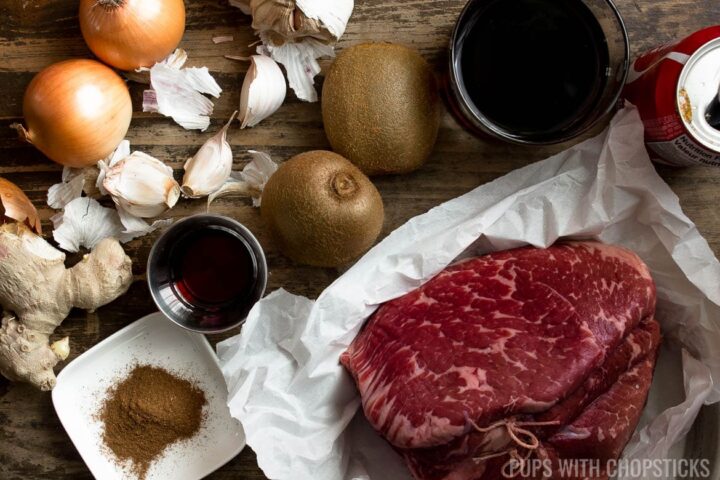 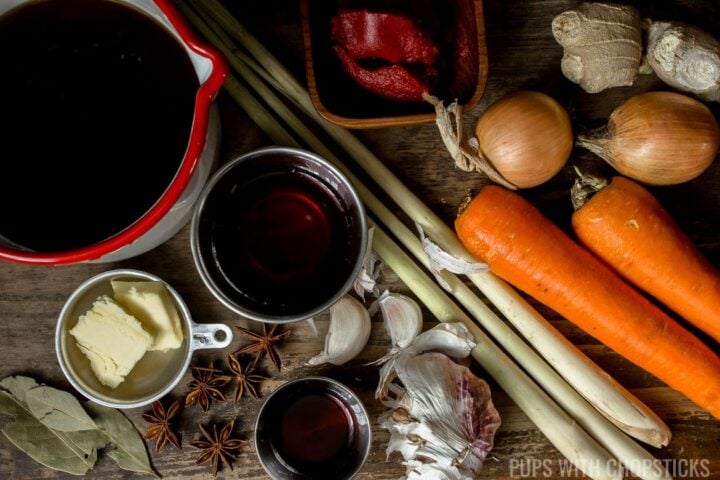 CUTS OF BEEF FOR BO KHO 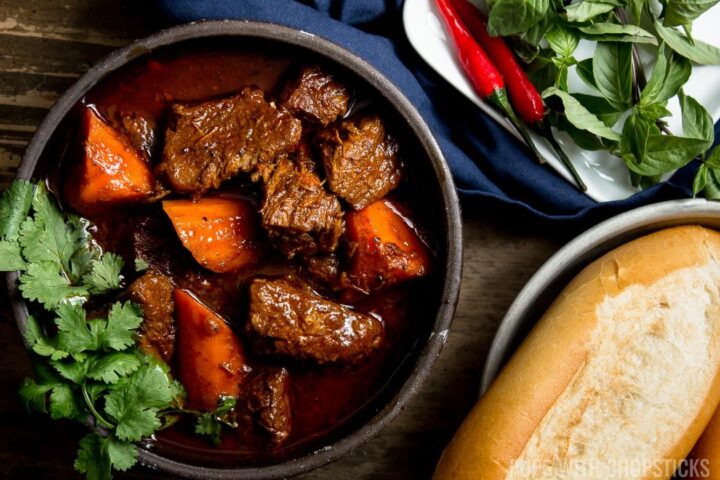 The type of beef cut you use in this Bo Kho is quite important if you want something tender with great mouth-feel without it being too dry or too stringy. Here are a few I turn to whenever I make Bo Kho, feel free to switch this up and experiment with it! Also keep in mind, that each type of beef's cooking time will also vary.

Beef Shank or Oxtail : I personally found the best cut of beef for this stew was beef shank or oxtail, partially because of all the connective tissues which eventually will melt into the stew giving it a silkier texture. The beef itself is very tender and has a slight chew without the stringiness. The downside to beef shank and oxtail is that it takes a lot longer to cook and it's harder to find unless you hunt for it at a butcher or Asian grocery store. This is definitely my favorite cut of beef to use for this recipe.

Chuck (aka top or bottom blade roast): This is my second favorite meat to use for the recipe. This is a fattier cut of meat which also has a great texture. The only downside to this is, it was a bit harder to find for me because it's not usually labeled as chuck here, it is often labeled as a blade roast or a blade pot roast. Other than that I have no negatives here with this cut of meat for Bo Kho.

Cross Rib Roast : In a pinch, I also like using cross rib roasts for stews. It's a lot less meaty tasting than chuck but it has a nice chew and can be cooked down into soft tender meat.

Boneless Beef Ribs : This one is more on the expensive side, but the marbling of fats combined with the connective tissues makes this a great cut of beef to use in Bo Kho. The final product when cooked is a very tender and buttery chunk of beef that practically melts in your mouth.

Traditionally, you will notice that beef brisket is used for Bo Kho but I tend to stay away from it since the texture isn't as good as the other beef cuts I mentioned (and it's somewhat expensive). No matter how long I cook it, the beef strands still are quite stringy and when I chew on the beef chunks, I feel like I'm occasionally flossing with it. This is also a very tough cut of meat and requires a lot of cooking time as well.

MARINATING (AND TENDERIZING) THE BEEF FOR BO KHO

I like to marinate meats before I cook them for additional flavor, but occasionally when I'm cooking tougher cuts of meat I like to use my marinade as a tenderizer as well. For Bo Kho, I like to marinate and tenderize the meat with a can of cola and a kiwi. The acids help break down the tissue (just make sure you don't over marinate this, 24 hours is usually more than enough time) and the sweetness from the marinade gives the stew just the right amount of sweetness. 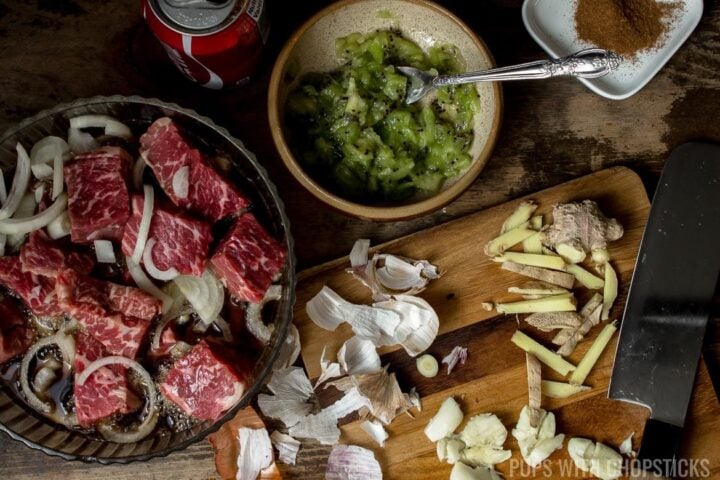 PREPARING THE REST OF THE INGREDIENTS FOR BO KHO

Browning beef is a pretty important step because it seals in the juices by locking in the juices with a crusty char but one of my main reasons for browning the meats are the char bits leftover in the pot. The little char bits are actually flavor! Once you start to add the liquids into the pot, the char bits will start to melt into the stew (with a bit of scraping action) giving it an extra layer of flavor.

Make sure when you are browning your beef, you are not overcrowding the pan. This will drop the temperature of the pan and your beef will end up steaming/boiling instead of browning. To get a nice brown crust on your beef, try not to touch it once you have it on the pan. This will give it a chance to form the char from the consistent heat on the meat surface. Check on it after 20-30 seconds and flip the beef. 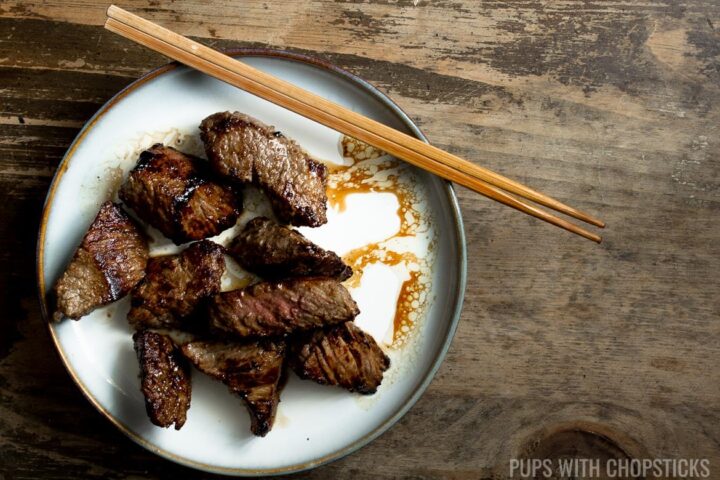 One of the reasons I love making this dish is because it can be eaten in 2 different ways. You can initially make it as a stew, and have it for dinner with some rice or dipped with a French/Vietnamese baguette and then make it to a soup for noodle bowl the next day simply by adding a cup of beef broth to it to thin it out and adding a bit more fish sauce to taste. That's a double-duty recipe right there! 🙂

DID YOU MAKE THIS RECIPE?

If you made this Bo Kho recipe, I want to see! Follow Pups with Chopsticks on Instagram, snap a photo, and tag and hashtag it with @pupswithchopsticks and #pupswithchopsticks. I love to know what you are making! 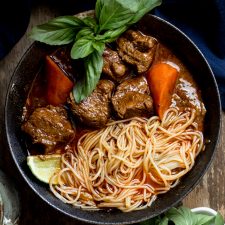 A Vietnamese beef stew has all the flavors of a traditional beef stew with additional aromatics from lemongrass and star anise to give it another dimension of flavor. It can be eaten as beef noodle soup with rice noodles or dipped in a french baguette! If you love beef stew, you definitely need to check out this Bo Kho recipe.
4.88 from 8 votes
Print Recipe Pin Recipe
Prep Time 30 mins
Cook Time 3 hrs
Total Time 3 hrs 30 mins
Course Main, Soup, Stew
Cuisine Vietnamese
Servings 4 servings
Calories 722 kcal

(Optional) If You are Transforming it to a Noodle Soup

Disclaimer: We are a participant in the Amazon Services LLC Associates Program, an affiliate advertising program designed to provide a means for us to earn fees by linking to Amazon.com and affiliated sites. While I appreciate the support – please try to buy your items locally if possible to support your local shops (chances are they are cheaper locally as well!)